On December 26, 1890, four Methodist ministers knelt in a densely wooded area near Jackson, Georgia. Their hearts were deeply burdened with the commitment to establish a camp meeting to communicate the message of Scriptural holiness to local church pastors. The result was Indian Springs Holiness Camp Meeting, one of the premier holiness encampments in the United States today.

The four founders of Indian Springs Holiness Camp Meeting were:  W.A. Dodge, H.A. Hodges, J.H. Curry and George W. Mathews.  These godly men were pastors from both the North and South Georgia Conferences of the Methodist Church.

From this original concept, the evangelical outreach of the Camp Meeting has influenced persons in all walks of life for 128 years.

Our Complete Statement of Faith 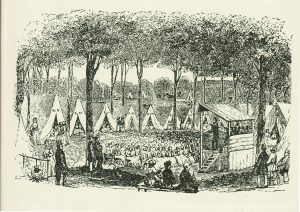 Indian Springs Holiness Camp Meeting has faithfully proclaimed the Wesleyan-Arminian tradition of Biblical holiness, as taught by John Wesley and the early Methodists. Indian Springs Camp Meeting continues to present a message that is relevant to all aspects of contemporary Spiritual life.

The camp welcomes everyone, regardless of denominational affiliation, who seeks to experience the fullness of God’s grace and to grow in spiritual maturity.

The tradition continues: God still blesses the work of Indian Springs today. From its altars, many generations have been challenged to a deeper walk with Christ. Many have gone into full-time Christian service as pastors or missionaries. Countless others, young and old alike, have given witness to the message of holiness in their daily lives, at home, church, workplace and all other aspects of their communities.

Indian Springs is independent and non-denominational. Worship services combine the best of old-time camp meeting singing with powerful preaching by the leading evangelists and Bible teachers of the day. It is the flagship campground for the holiness movement in the South and is the largest camp within the state of Georgia.

The Origins of Camp Meeting in America

The first camp meeting began in Logan County, Kentucky, in 1799. These meetings developed to supply spiritual needs that were not being widely met by local churches. Large open tabernacles, or arbors, covered the preachers and worshipers during the services, while tents or wooden cabins housed the attendees during the encampment.

Trees often served as the architecture of early camp meetings, with candles and pine-knot torches lighting the evening services and campfires illuminating the worship area. Typical encampments were laid out in a square with tents forming the perimeters. The interior was filled with parallel log benches with a preacher’s platform in the center. Camp patrons brought their own tents, servants, and cows for the duration of the 10—14 day meeting. Camp meetings would often attract crowds of 10,000 people at a time. By 1820, there were almost one thousand camps in America.

Peter Cartwright was converted in one of these very early camp meetings, and he went on to become one of the most famous of the camp meeting preachers of his day. The movement spread so rapidly that by 1805 Francis Asbury called the summertime meetings “Methodism’s harvest time,” and encouraged the Methodists to have six hundred camp meetings by 1810.

In the mid 1860’s, some camp meetings began to be held purely for the promotion of Scriptural holiness. Under the leadership of Rev. John S. Inskip and others, “The National Camp Meeting Association for the Promotion of Christian Holiness” was organized in 1867.

These highly successful camp meetings served as the springboard that brought many of the present-day holiness denominations into existence. This same movement inspired some of the important holiness educational institutions, such as Asbury College and Asbury Theological Seminary.

Many of the great holiness camp meetings of today, including Indian Springs, were organized in the latter part of the nineteenth century through the inspiration provided by the National Camp Meeting Association. Various holiness associations still exist today as support to many camp meetings across the country.

(These notes are adapted from material originally prepared by Dr. Martin Hotle, Executive Director of the Christian Holiness Partners, and from The New Georgia Encyclopedia.